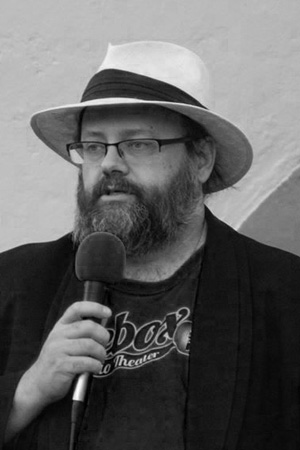 Jeffrey Adams has been creating audio dramas for more than 20 years, and is responsible for comedy classic Lance Manley, Library Detective, and the classy and lovable Rum Runner Sue. Read on to learn more about Jeff and his audio crew; the ever-versatile Icebox Radio Theater.

Icebox Radio Theater has been a prolific creator of audio drama over the years. How did you get involved in writing and performing radio plays?

I had been writing fiction and stage plays since college not even aware that radio was still ‘a thing’ until I read about the Midwest Radio Drama Workshop (a predecessor to the Hear Now Fest) some time in the 90’s.  The idea of writing radio drama stayed in the back of my mind until we approached the turn of the century.  There was all the concern about Y2K, and I had a statement I wanted to make about that.  I wanted that story to reach the largest audience possible, and that made me think again of radio since I had no experience in film or TV.  I wrote my script. To my surprise, a small group in Tennessee produced it.  I never really looked back after that.

Is Icebox a real place in Minnesota? Just how cold IS it?

Icebox is amalgamation of International Falls and Ranier, Minnesota.  Most of the culture and characters I took from Int’l Falls where I live, but when I picture it in my mind, it’s much closer to Ranier, which is only about a mile away.  Many decades ago, International Falls trademarked the name ‘Icebox of the Nation’ in an attempt to build some notoriety around our cold climate.  We routinely dip below freezing sometime in December and do not emerge until March or April, and snow can fall any time of year (I once saw snowflakes on the 4th of July). Most winters, we spend a week or two below zero Farenheit (that’s about -17 C)  with some overnight lows in the -30 to -40 F range.

IBRT creates so many different genres. Do you have a favourite?

I’d say horror, definitely.  I enjoy producing all kinds of stories but horror can be so wonderfully immersive in audio, it’s a lot of fun.  That, and horror seems to be an audience favorite, very well suited to audio.  Comedy is a close second, though.  There’s nothing like making people laugh.

How do you get inspiration for your plays and characters (and the ‘TooBright’ adverts, which get funnier by the episode)?

I’ve always been ‘an idea guy’.  All writers have weaknesses (Lord knows I have mine) but a shortage of ideas was never one of them.  I like to begin with a situation, usually a conflict of some kind, then sort out what kind of characters would be in that situation.  I’m a big believer in thinking of stories as something to be excavated, not created.  All stories exist somewhere in the ether and it’s my job to dig them out, (if one can dig in ether, that is).  For example, you mentioned the TooBrite commercials (thanks for the compliment, by the way).  Lance Manley is a conscious tribute (or parody, if you’d rather) of old time radio detective series.  When I was writing the first one, I realized old radio shows all had sponsors so we needed one.  Then it was a matter of coming up with something that was 1) funny, and 2) fit somehow with everything else.  Book lights fit with libraries, and the paranoid tone of the spots fits with the cold war setting of Lance’s world.

What advice or tips would you offer to other writers and actors?

All the usual, of course: listen and read as much as you can and write regularly.  Remember to write “In Sound”, that is, tell your story by telling the reader what they are hearing at any moment.  Think in terms of sound.  What sounds are elemental (necessary to place the listener in a particular setting) and what sounds inspire an emotion?  For actors, work as much as you can (and there is A LOT of work available right now!) and take the technical aspect seriously.  If you have a good mic and a good recording setup at home, you can work anywhere.  But no matter how un-technical you feel, put in the time and learn how to use the equipment properly.  Learn how to run your recording program and a communications app like Zoom at the same time.  It’ll be worth it.

Probably our Ambie nomination in 2021.  I’m not sure the podcast academy is going to become significant to the industry, but it was nice to be honored at their first awards.  We had an outdoor party for the event which was, for a lot of people in town, their first social gathering since Covid.

What have been your biggest career challenges so far? How did you tackle them?

I think the biggest challenge has been our location and the size of our community.  Int’l Falls has about 6,000 people and is very remote, at least a ninety minute drive to any community of size.  It’s very working class and performance of any type isn’t always looked upon favorably.  Finding talented actors has been a challenge but we have a very talented corps now due to years of practice and patience.

Like Wireless, IBRT often records live productions. What are the challenges and rewards of recording live?

Where to begin?  First, at 55 years old the live shows are becoming very challenging physically for me.  Not just the heft and heave of getting all the gear in place, but the mental aspect of keeping all the show’s elements, both artistic and technical, straight in my head.  I’ve become quite a fan of checklists and I think anyone who doesn’t use a checklist is just trying to hold on to the illusion of youth!  As far as rewards, there’s nothing like the energy of live theatre.  Creating a work of art that’s captured in a moment in time is really quite special.  And I, as an old time radio nut, I dearly love the fact that we can broadcast live over the internet now and share the energy of performance to an audience that’s anywhere.

Have you heard any great audio dramas lately? Is there anything you would like to recommend?

I’m not a very consistent listener, but once something gets its hooks into me I tend to binge hard.  I’m telling everyone about ‘In Strange Woods’, a musical/docudrama mystery about the fallout from a young man’s disappearance in a small, northern town.  I’ve had several friends give up after the first episode which is the weakest of the series, so I’m telling everyone to give it at least two episodes.  It’ll be worth it.  And I did enjoy ‘Broken Colours’ from the BBC very much.  I’m studying the BBC more and more for sound design ideas.  ‘Colours’ is about the best thing I’ve heard from them in years.

What have you been working on lately?

Always working, of course.  Lots of planning at the moment as Icebox is going to try and double production in the second half of 2022.  We’re in the middle of ‘The Smell of Pines, Darkly’ a horror/mystery series about a family of serial killers.  I’m looking to write more short pieces in the coming months so that we can give some of the interested newcomers in our group the chance to try voice acting (not sure how many of those will be released for obvious reasons) and we plan to continue ‘Table Plays’ a video series where we record a play in a single take with camera running.  And Lance Manley and Rum Runner Sue are both coming back this year, I promise.

Where can listeners enjoy your work?

All the usual, Podbean, Spotify, Apple Podcasts, etc.  And for browsing purposes, nothing really beats our website at iceboxradio.org. Or you can search for Icebox Radio at Spreaker.com.  If you prefer streaming radio, we have a station that you can find by searching ‘Radio Icebox’ on the Tune In app.