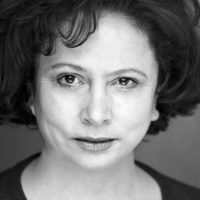 Rachel Atkins is a hugely experienced voice-actress who perhaps most notably played Vicky Tucker in The Archers for the BBC. She has worked extensively in computer games, and recently voiced key parts in long awaited video games Fable 3, Dragon Age II and Dragon Age lll.

For television her credits include her recent portrayal of Niyazova in the Sky series ‘Chernobyl’. She has appeared in BBC’s ‘Casualty’ and ‘Humans’. Her previous roles include characters in Doctors, Eastenders and Pompeii: The Last Day

Rachel can be booked through her agent.

For Wireless Theatre, Rachel stars in Devon Girl and The School Run. She’s also appeared in the classic series of plays with Wireless Theatre for Audible, including Ibsen and Chekhov as well as several roles in their upcoming major release Monster ’83.

Listen to Rachel in: DEVON GIRL and THE SCHOOL RUN