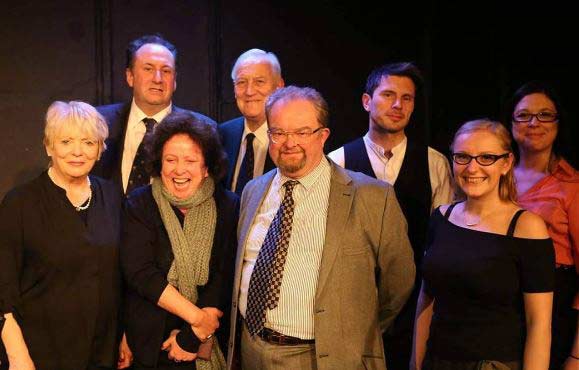 On a cold Christmassy morning in December, the Wireless Theatre Live team descended on The Lion & Unicorn Theatre in Kentish Town to set up for our one off live recording of audio comedy LADIES. An entirely new script written by the talented Laura Harvey who had submitted her script via our online submission process. The ‘get in’ process can take several hours, as all the microphones have to be set up (by our amazing sound ladies Tshari King and Izzie Newbury) and the lights (by Gareth Brown). This took place at the theatre while the cast did a read-through down the road at director Cherry Cookson‘s house.

Despite having over 30 years of experience directing radio drama, LADIES was Cherry’s first foray into live audio drama recording – but thankfully she had our hugely experienced tech team and a cast to die for, so it all went well. The cast was a dream come true for us here at Wireless Theatre – comedy legend Alison Steadman took the lead role of Ines, alongside Wireless Theatre Live regulars Jessica Dennis, Sarah Whitehouse and Adam Hall. The cast was made complete with Geoffrey Whitehead (Not Going Out) and regular BBC radio drama performers Rachel Atkins, Stephen Critchlow and David Timson.

Poor Alison wasn’t feeling very well, but she didn’t complain once, stocking up on lemon and ginger she battled through a read-through, tech run, dress run and sold out performance. We always record the dress rehearsal just to be safe, as well as a dry take of the credits – but it’s much more fun to use the once from the actual performance as that (usually) has loud, enthusiastic applause behind it!

It was a long, tiring day, but the recording went exactly as we wanted it to and the audience loved it. It’s always incredibly nerve-wracking as, even though the actors have their scripts so they don’t need to learn their lines, they still only have one day to rehearse the show. This includes all the blocking, who stands where and rehearsing in all the sound effects – we had a combination of pre-recorded SFX and as many live sound effects as possible performed by the brilliant Jessica Bowles. Watching the live sound effects is part of the magic of watching a live recording and the audience always loves it. A particular highlight of this show was watching Jessica Dennis as Eloise relieving herself in a Victorian alleyway – definitely not something a woman was often seen doing in those days!

Laura’s script was hugely well received and we all had a great time. We’re sorry you missed it if you wanted to get a ticket, it sold out very quickly – but you can listen to the full production here. We hope you enjoy it!

Behind the scenes photos of the rehearsal of audio comedy Ladies with Alison Steadman.