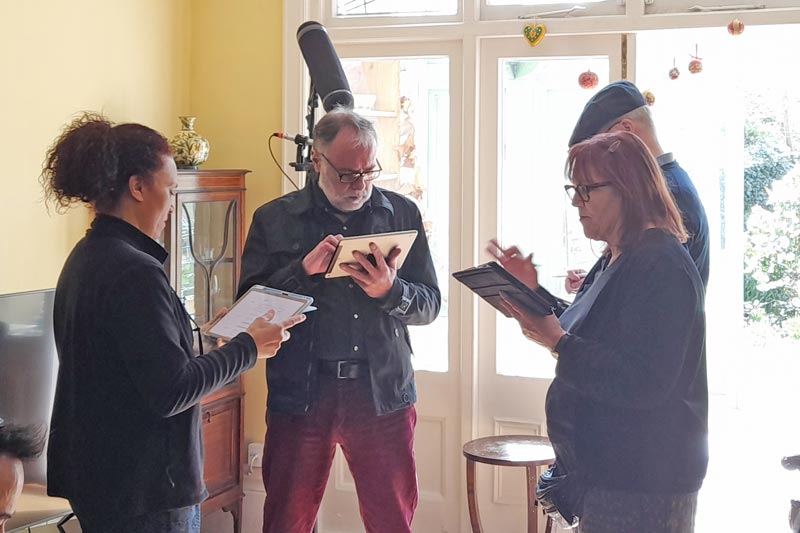 Wireless were VERY excited to be recording a new Wireless Original audio drama just a few days ago!

‘Open Air’ by Zalie Burrow is the story of Ruby, whose beloved theatre company has gone under during the pandemic. Returning to her father’s farm in Devon, Ruby discovers that he, too, is struggling.

While he has lost hope, Ruby is still full of ideas, and takes him on a trip to the Minack Theatre, where they learn about the story of Rowena Cade. Ruby is inspired, and sets her sights on turning her father’s barn into a community theatre. All she has to do now is convince him not to sell the farm…

This is an intimate play, which very much captures the impact that the pandemic has had on family relationships, people’s livelihoods and identities, and also more widely on the Arts. Its spirit is in reconnecting people after difficult times, and in building new opportunities and fun together. It celebrates Rowena Cade’s strength of mind, her achievement in creating the Minack Theatre, and the power of theatre in the community.

Zalie Burrow is an experienced writer and performer who has written for BBC Radio 4, as well as several plays and a comedy series for Wireless. Open Air is directed by Cherry Cookson, an award-winning director and BBC Radio Drama producer who has also directed a number of Wireless Original Productions.

Here’s a sneak peek from the recording to whet your audio appetites – look out for Open Air later this year!