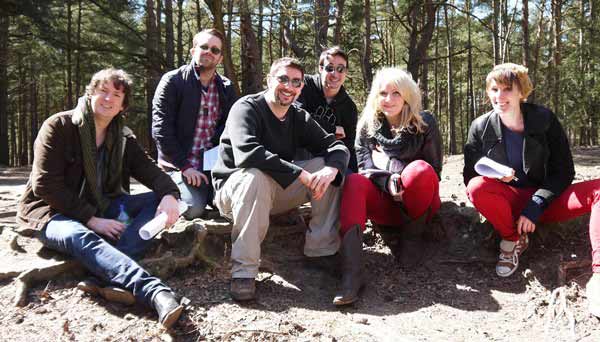 No one would have believed, in the last days of two-thousand-and-sixteen, that the copyright status of H.G. Well’s seminal science-fiction novel, The War of the Worlds, was being watched keenly and closely by members of The Wireless Theatre Company; as the book crept ever forward in its inevitable trajectory towards the public domain its progress was scrutinised and studied, perhaps almost as narrowly as a man with a microscope might scrutinize the transient creatures that swarm and multiply in a drop of water. Slowly and surely we drew our plans, and right bang at the start of 2017, we released DEAD LONDON. And we’ve been waiting for quite some time to do so.

Back in 2013, Radio Drama Revival announced the War of the Worlds 75th Anniversary Competition to commemorate Orson Welles’s legendary/infamous 1938 Halloween broadcast, which sent whole families heading for the hills in panic. The challenge was to create an audio piece – under 15 minutes in length – that involved the following compulsory elements:

1. Arrival inside a meteorite.

Beyond that, entrants were free to do whatever they wished; as long as you included those four story points you could go wherever your imagination took you. In the USA, The War of the Worlds was already well out of copyright so it occurred to us that the judges wouldn’t necessarily be very interested in a straight adaptation of the book. However, for a bunch of Brits who would otherwise never get a chance to adapt Wells’s novel without the risk of litigation (2017 seemed a really, really long way off to us back then), we knew this was our one chance to have a stab at doing the tripod-tastic classic.

Jack Bowman and I wrote the script, and decided to be as faithful as we could to the source material; it would therefore have a contemporary setting (as did the original at the time of its writing) and we would honour the story’s political subtext. H.G. Wells wrote The War of the Worlds as a not-very-veiled-at-all criticism of British imperialism in which Britain got a taste of the medicine it had meted out abroad. Our version – DEAD LONDON – would therefore be a tale in which the early 21st century Western Powers find themselves on the receiving end of a superior military’s indiscriminate ‘shock and awe’ tactics.

Knowing that doing the production as a location-recording would be both cheap and suitably gritty, the idea of recording at Horsell Common – the sandy spot in Surrey where the first Martian cylinder comes down in the novel – struck us as something that would give the whole thing an extra bit of magic. So, with a small and merry band led by director George Maddocks, sound-recordist Malcolm Thorp and producer Mariele Runacre-Temple, we and a bunch of talented actors descended upon the legendary sandpits. During post-production, the next bit of magic happened when Jack and Malcolm, while recording Wireless Theatre’s Life At Death’s Door, cornered its narrator, Brian Blessed, and got him to provide the vocals for the Martian invaders. Mr Blessed – a great fan of the novel who at one time had planned his own film version – was not only happy to contribute a whole host of very strange noises to the project but also knew exactly what each one meant and where it would come in the story. So all those weird sounds the Martians make in DEAD LONDON… that’s not technical jiggery-pokery – that’s Prince Vultan.

So please check out Wireless Theatre’s DEAD LONDON. It was a unique and very fun project to make, and is yet further proof that H.G. Well’s masterpiece is as relevant now as it was when it first made print. Ulla!

You can listen to DEAD LONDON here

You can see photos of the recording here