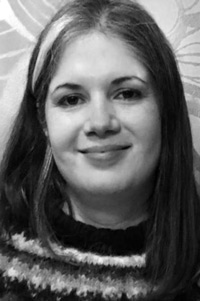 Elizabeth Parikh is the writer of police audio drama OMEGA and I Heart Amy. An accomplished writer and author, she very kindly agreed to be subjected to a thorough grilling. If you have enjoyed her plays and wondered where she finds inspiration, or are a budding writer looking for tips, this is the interview for you.

OMEGA explores the experience of a police recruit in the North of England. How similar were your experiences in the police force to those of Angela and Gifty? Were you involved in many exciting cases?

I borrowed a lot from my own experiences. Just like Gifty, I am from a non-white background, and worked as police staff (suspect interview typist) before becoming a Constable in the north. The first time I cautioned someone I also got the words muddled and had to start again. Unlike Gifty I was never caught off guard by car bombs or raining journalists, but I did enjoy some excitement. Going anywhere at high speed was always an experience. I was on geographic patrol so dealt with day to day cases. On my ward that was mainly drugs and domestic violence. As a team we were always stretched. I once attended a job at Blackpool Victoria Hospital because a patient had turned violent towards staff and other patients, and at the same time a team member across town was pressing their panic button because a brawl with weapons had broken out at a nightclub.

You write widely for radio, television and theatre, and now as a novelist. Do you prefer one medium over the others?

Audio is absolutely brilliant because you don’t have to take budget into account when forming ideas. Anything can be done very cheaply and the sound designers and composers will make the finished piece sound spectacular every time. Audio is known for being a really friendly environment and it’s true. The team work and camaraderie is wonderful amongst cast and crew (and hangers-on like the writers!) The producers and directors I’ve worked with in audio (Jack Bowman, Paul Walker Blinkhorn, and Rob Valentine) really know their craft and I know I can trust them to put together the perfect cast, make the right decisions and it’s always surprising just how great the finished piece sounds. The standard always flies past what I thought might be possible.

Having said that, all mediums are great to write for. I had wanted to write TV comedy from a very young age so seeing my name within a show’s credits for the first time was very satisfying.

When writing audio scripts, do you have an idea of how the characters sound?

I actively encourage hearing voices in my head and have got them all talking to me and to one another before I begin writing the script. Putting them in an everyday scenario reveals a lot- a job interview, an argument in a queue. It’s a great way to discover character flaws, hidden kindness etc. Writing short monologues for them helps enormously to map out their back story. What is also revealed is their rhythm, their class, their confidence (or lack of) what influences them, it all starts to come out when you get characters up and running.

Where do you draw your inspiration for characters and situations?

Something strike a chord and if I’m still thinking about it a week later I know it might be a story I want to explore. My 2017 drama I Heart Amy was inspired by the number of times I’d heard news stories about people who have died shortly after getting married. When I looked into stories about grief, and how people move forward I found very few that do justice the grieving process. Many widow forums mentioned Anthony Minghella’s film Truly, Madly, Deeply starring Juliet Stevenson and Alan Rickman which is an outstandingly beautiful, funny piece but it was made in 1990 and there haven’t been many stories focussed on grief since then of such prominence. I’ve become more aware of how grief is handled in stories, and particularly how it’s often avoided. Most people will grieve at least one loved person in their lifetime, and it’s also a common fear to lose the one you love. I think it should be talked about more, to show what some people are often quietly going through.

How many drafts do you typically write before you consider a script ‘finished’?

My preference is to edit as I go along, so lots of mini re-drafts. Then I let draft one ‘cook’ if time allows, for a week or two, so I can get fresh eyes on it. The first re-draft is always a big job, often with big changes in storyline. I also get my very accommodating husband Simon to read things out and make changes like correcting wordy dialogue. He also gives very honest opinions. Then I’ll probably do at least another six drafts ideally with a day in between each draft, when I’ll be working on a different script.

When writing comedy, are you able to tap into your comedic side easily? (If not, do you have any tips on how you get into the comedy mindset?)

It’s very easy to tap into my comedic side, watching videos of live TV going wrong, that one of an Irish family chasing a bat.

Essential is reading comedy scripts (lots for free on BBC Writersroom) and making sure your characters are funny. A brilliant tip I’ve heard is if you can write three comedy sketches featuring the same person then you’ve got yourself a comedy character.

How did you find your way into writing from your previous career?

Like most writers I’ve always written, but going to a brilliant writing group (Northants Writers’ Ink) was a game changer because the group were very encouraging, and they all took writing really seriously alongside their careers. When I had my first bit of commercial success I decided if I wanted to do this at least as a part-time job that I really needed to ramp up my efforts. The BBC Writersroom website has an opportunity page for people like me who had no writing experience, aren’t based in London and zero industry contacts. Having a selection of open-door competitions in one place was perfect and I’ve had quite a bit of success with this website alone.

What are you working on right now?

A sitcom that is a bit more grounded than my usual style. A horror story that could work across different mediums. And a comedic, supernatural, murder mystery novel that is set in the Lake District at Christmas time.

If an aspiring audio scriptwriter were to ask you for advice, what top tips would you pass on?

Use the medium. A ticking grandfather clock in an old creaky house occupied by MI5, or crawling through a travel port hole to find Michelangelo performing an autopsy. You can have it all so let your imagination run wild. Characters are everything. Whatever world you take the listener to, give them a good set of companions to go with. A theatre tip on character is to think about how they see themselves, how they think others see them, and how others really see them. For example, a character might see themselves as a very strong, reliable and intelligent person. They think that others look to them for leadership and guidance. In reality, most people find them interfering and a bit patronising but always making time to help others. Using this tip helps me to shape the dialogue of each character and the people who interact with them. It neatly reveals their flaws and strengths.

Write stories that you would genuinely be interested to listen to. Go to audio drama websites, write down the titles that interest you with a note of why it caught your eye, and see what patterns start to emerge. Do you always pick dramas with political themes, or that promise romance, or are set in a post-war era? Finding out what does and doesn’t interest you is useful and can shape the stories you should tell.  Do your research. Many companies and charities are more than happy to help, send an email, they can only say no.

BBC Writersroom opportunity page, check it every day for audio and other opportunities to get you writing. Read writing forums, join Facebook groups, follow production companies of interest on twitter. Also, networking is important. I teach part-time and it can be tough to find time to get out and meet industry people but I’ve been to plenty of mid-week events on my own which can be tiring but worth it. Sometimes it’s been more useful than others, but nothing has ever been a waste of time. There’s also nothing wrong with sending a message to a key person you’d like to speak to and asking them to meet for a coffee or a video call. Again, they can only say no.

Have you listened to any great audio dramas or scripted podcasts lately? (if so, what were they and why did you enjoy them?)

Rob Valentine’s audio drama Red Moon was recently aired on Radio 4 which was great and I loved it because Rob really uses the medium of audio to make space political! It’s such a clever idea. Early in lockdown I listened to the Fake Heiress, a really good journalistic piece that was also partially dramatised by Chloe Moss. I also listened to True Horror Podcast Let’s Not Meet in which contributors had taken time to compose stories of their real life experiences, and were brave enough to send in these very personal encounters to be turned into a narrative podcast. It just shows the power of audio, sometimes you don’t even need special effects to plunge someone to another world. I’ve also finally started DELETE by Nina Millns. This play is fantastic, Nina has incredible story telling powers. She paints some amazing pictures through speech. It’s also very sweary and funny.