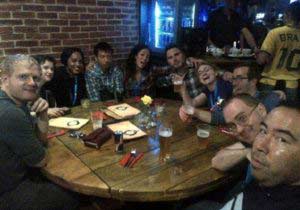 Our trusty Wireless Theatre crew are no strangers to the excitement and hard graft of performing at the amazing Edinburgh Fringe. As you know, we do love to record our audio plays live, so in 2014 we took our shows to Edinburgh and did just that. Not content with taking merely one or two new radio plays to the Edinburgh festival fringe, we went the whole hog and took all eight of our ‘couples who changed the world’ series as Nina Millns describes in her blog post.

So, if you’re feeling nostalgic for the Edinburgh fringe, or excitedly anticipating Edinburgh Fringe 2021, enjoy 6 of our ‘Couples who Changed the World’ plays, and a handful of audio comedy plays which were previously presented at the festival.

Couples who Changed the World