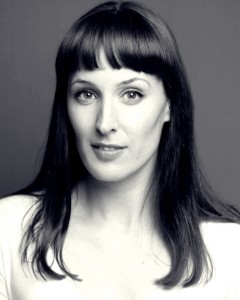 Josephine Arden is the fabulous voice of Daisy Chase in our comedy series Purdy and Chase, and has turned in many sterling performances over the years. We caught up with Josie to ask for her top voice acting tips.

You have delivered some cracking performances for Wireless Theatre over the years, across a wide range of genres. How did you come to be involved with Wireless?

I first met Mariele when we were both working as actors at The London Dungeon, which feels like a lifetime ago now! A few years later, I was in a play at The Etcetera Theatre, and not too long after that she launched Wireless and that same play, Frozen, was (I think!) the first audio drama adapted and recorded for Wireless. The rest, as they say, is history!

Over your career so far, you’ve acted in stage, film and audio roles. Do you have a preference?

Theatre will always be my first love. There’s something about the live theatre that is just so exciting, and the rehearsal process is probably my favourite part of that. Forming a company, building camaraderie, and the vulnerability and excitement of taking risks as you go through the rehearsal process is something I’ve missed hugely in the last year and a half. That said, audio drama is a very close second because of the freedom it’s given me to play roles I would never be able to portray onstage (like an 8 year old boy, or a dog!).

Do you gravitate more naturally to comic or dramatic roles, or are you equally comfortable with both?

I really don’t have a preference; I’ll happily take whatever I’m given! I think various points over the years I’ve probably found one easier than the other but these days I appreciate the opportunity & challenge. Is that a sign of middle age?!

What advice would you give to aspiring voice actors? Have you received any advice that especially helped you?

Speak as if the microphone is the ear of your listener. Stage actors have a tendency to want to vocally fill the room. That was a big lesson for me, to tune into the microphone as the audience.

Secondly, your voice is unique, and that’s what makes you special. Don’t try and iron out what you think are ‘imperfections’ too much, because individuality is no bad thing. I spent a long time fighting how young I sounded, because I wanted to be taken seriously and thought I needed to sound ‘grown up’ for that to happen. I didn’t realise I had a specific set of skills in being able to sound like a child, and the very thing I’d tried to avoid is something that has been very lucrative, and loads of fun.

Lastly, breathe! So much can be expressed to the listener through the way you/your character breathes – don’t forget about it, it’s a brilliant tool!

Which acting experiences do you hold closest to your heart from your career so far?

I will always be grateful for the opportunity to work on the 3 part epic that was The Scarlet City for Audible. I was cast in Part 1 as Blanche de la Pole, who is about 8 years old when we first meet her. She comes back in the Parts 2 and 3 as a grown young woman, and without giving too much away, is then heavily involved in the rest of the story. It was a wonderful chance to explore her development as a character, and really stretched me as an audio actor. The whole creative team were top notch, and I will forever be grateful to the director Barnaby Edwards for his patience and guidance as I emailed him voice notes with different samples of voices for Blanche (who was from Hull) at different points in her life in the weeks leading up to the recording.

Purdy & Chase will always hold a special place in my heart, it was just the most gorgeous series and always makes me smile when I think of it.

Finally, Dead London, also recorded for Wireless felt like a ‘growing up’ moment for me. Recording outside on location was really exciting, and the balance between capturing the scale and chaos of what was happening on the Common with the more intimate scenes when Georgina is speaking directly into her Dictaphone was achieved so well; the sound engineering team had their work cut out for them and they did an incredible job.

Who are your acting heroes? Who would you most like to work with in the future?

Two women I admire hugely are Maxine Peake and Anne-Marie Duff, I’d love to be in a room or a studio with them, and to have the opportunity watch them in action.

What are you working on at the moment? Is there anything Wireless listeners can see or hear you in?

I’m the voice/narrator of the Lottie Luna audiobook series, by the magical author Vivien French, the latest one was recorded earlier this year.

For the grown ups, I narrated ‘Safe and Sound‘ in January, second novel from Philippa East, a narrative-driven psychological thriller written in the first person:

They’re both totally different, but I’m very proud of both!